DOMA, DADT, and the President of the United States of America

Life is too short to ask anyone to lie about who we are.  Life isn’t long enough to deny our dreams.

A gay married couple in California

In the United States Attorney General’s written support of the Defense of Marriage Act (DOMA), another slap in the face arrived for the gay, lesbian, bisexual and transgender  (LGBT) community on embossed Federal letterhead.

The Defense of Marriage Act (DOMA) states that state-sanctioned marriages between same-sex couples are not required to be acknowledged in other states, nor are they to be recognized by the federal government.

In the case of Smelt v U.S.,  the plaintiffs, a gay married couple, propose that DOMA is unconstitutional.  In their response, the Obama Administration’s Department of Justice (DOJ), as required by law for all currently  operational statutes, provided a document of support for DOMA.  While it is statutorily appropriate for the DOJ to act in this fashion, it was also possible for the President or a member of his cabinet to make a statement about this untenable situation.  This was not done.

As with the Don’t Ask, Don’t Tell (DADT) policy, President Obama’s silence regarding DOMA is akin to Ronald Reagan not speaking the acronym “AIDS” (Acquired Immune Deficiency Syndrome) for the first several years of his presidency.  In all three cases, the silence is a tacit statement of neglect for these important issues.

What is apparent is that there is a willingness to dismiss the LGBT community through  governmental  inaction, perhaps because it is too hard to face for the Federal or State governmental bodies, or perhaps there truly is an assumption of second class citizenry for those in this section of the electorate. 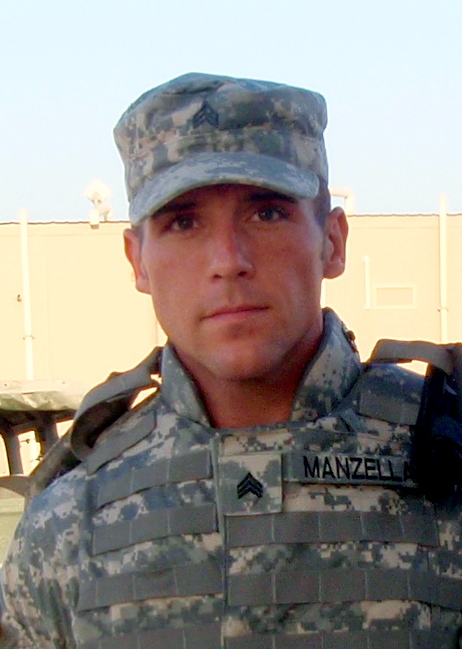 Army Sergeant Darren Manzella, discharged for being openly gay in 2008

DOMA and DADT must be repealed.  They are discriminatory.  It’s that simple.  Any president of the United States that does not understand that, does not see the history of our country repeating itself once again, no matter what is said about his education or background.

Lyndon Johnson took a strong stand against discrimination toward  Blacks in the 1960’s.  Woodrow Wilson signed the 19th Amendment to the Constitution giving women the right to vote in 1920.  In 1862 and 1863, Abraham Lincoln signed the two documents that comprised the Emancipation Proclamation that freed the slaves in the United States.  What will President Obama’s legacy be?  Will it be one of neglect toward fully ten percent of the population of our country or will it be as a dynamic force for liberty for all in the same light as his courageous predecessors?

I, for one, am hopeful that President Obama will come through as a strong leader.  His history indicates that this hope is grounded in his focus prior to becoming president.  Unfortunately, thus far, his actions have told a completely different story.

Perhaps a page from California Attorney General Jerry Brown’s book would assist the President in his education regarding how to be an effective and dynamic force for change.

Within the next year, we will see exactly where he stands.  I suspect by the first anniversary of his oath of office, we will have a clear view of how the LGBT community is perceived by this standing president.

I pray the news is good.

Those days when I feel like a high school student again learning something new are my best days.   Days similar to when I was not yet a dozen years old and my father, the pharmacist, taught me to read and write in the Latin prescription abbreviation lexicon, such as q.i.d. meaning four times daily, help me feel empowered by the fact that my still available brain cells are in fully working order.

Today was just such a day.  I read State Attorney General Edmund G. “Jerry” Brown’s official response as an amicus curie regarding Proposition 8.  This brief, filed in anticipation of the upcoming hearing about the constitutionality of Proposition 8, was lucid and vibrant in its language.  AG Brown hit every salient point in his attempt to respectfully remind the California high court of the specific law and precedent regarding this case.  As a citizen who remembers when he was referred to Governor Twinkie, I am especially grateful to The Honorable Mr. Brown for his insightful and powerful points of law.

Amongst his many important points, Mr. Brown reminds the court that in Article 1, Section 1 of the California Constitution, our citizenry is imbued with inalienable rights afforded to all its citizens.  Not unlike our Federal Constitution, these rights are to be wholly ensured for the entirety of the population without prejudice.

I am no lawyer and I have not done any research on the case law whatsoever.  I can only say that reading his words gave me hope; a hope that resonates within me back to a time that may have even been before my own birth.  In these last few months, I have learned that I can, once again, have the pride and hope in my state and country that we are moving in the right direction and that everyone will be given a map for the journey there.

When my Aunt Mary would bake one of her delicious chocolate cakes for my birthday, my mother would make sure everyone at my party would get a piece and that each piece was the same size.  She would remind me, if I happened to complain that I was the birthday boy and should have the largest piece, that I did nothing to earn the cake.  This dessert was simply a way to celebrate with everyone the event of my birth.  Everyone there got the same size piece of cake.  It was automatic.

Mr. Brown has suggested to the court that everyone should get an equal share of the cake in the State of California.   He is promoting  the concept that whether one is homosexual or heterosexual, Asian or American Indian, short or tall, young or old, no one has earned the right to have a larger share of happiness in their lives.  We are each entitled, by our very citizenship in this state, to the right to be offered a slice of California life and joy equal to anyone else’s.  Whether one chooses to accept is up to them, but the offer must be there in the first place.

Certainly, Mr. Brown did not talk about cake or height or age, but that is what I read between the lines.

Is it possible that the signateurs of all the Amici Curie in this case who support the overturning of Proposition 8 all believe similarly with regard to the law, even if, in their private lives, they may feel differently?  Can it be true that a small majority of a population can vote to erase the codification of joy and then be held accountable for that blatant discrimination?  Apparently, these things are true.

There are many who wrote in support of Proposition 8.  They, too, have the right to speak freely and put forth their cause before the court.  From the briefs I read on their part, I was a bit shocked at what I read; however, I know that beliefs long held are strong.

I have no idea how the court will rule.  I know what I want to happen, but fortunetelling, especially in this day and age, is a bit beyond me.

Thanks to Mr. Brown, however, I have found another level in my resurgence of hope.