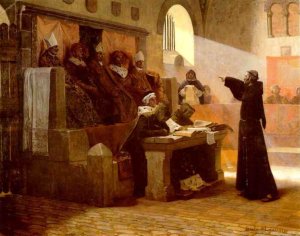 Beginning in the 12th Century, the Roman Catholic Church sought to purge the world of those who were heretics to the Word of God and the law of the church.  Heretics were punished, sometimes by death depending on the era, and most often at the hands of secular and governmental bodies.  In the 15th Century, King Ferdinand and Queen Isabella established the Spanish Inquisition, separate from the Roman church, but with the same intention and outcomes.

The purpose and reasoning for these trials were specified in the 1578 handbook, Directorium Inquisitorum, “…quoniam punitio non refertur primo & per se in correctionem & bonum eius qui punitur, sed in bonum publicum ut alif terreantur, & a malis committendis avocentur.” Translation from the Latin: “…for punishment does not take place primarily and per se for the correction and good of the person punished, but for the public good in order that others may become terrified and weaned away from the evils they would commit.” [1]

As I read the commentary by candidates and public officials such as Sally Kern (R-OK) who have stated that HIV/AIDS and the bombardment of homosexuality upon our children is a greater threat than terrorism, and that our country being exposed to homosexuality destroys our virtue as a country, I cannot help but harken back 900 years to the era of those who would cleanse their world of those who had different views than those in power for the betterment of the community-at-large.

There are some differences, though.  First of all, the extreme right-wing political groups are a tiny fraction of the overall electorate.  They are loud, certainly, but they are not the majority by any measure; yet, when we look again at the structure of the Inquisition in the 1100s, we realize that the powerful minority was attempting to take action against those who spoke against their belief systems.  How is it that we are allowing this process to begin again?

As we see “Don’t Say Gay” and “Defense of Marriage Act” bills flooding our country, we realize that a segment of our population seeks to quash the civil liberties of a portion of our population.  Legislative action has been suggested and taken to stem the evolution of our social structure to ensure that the status quo remains in place.  This all sounds dreadfully familiar to those who understand history.   The manner in which these processes are developing may be different, but the results are the same: Stop anyone who speaks out against those who bellow the loudest and do not believe as the extremists believe.  Is there a difference, though, in these processes?

Some right wing candidates have put forth a suggestion that there should be a congressional inquiry into the operation of pro-gay and pro-equality organizations.  With their desire to get to the truth about who funds and supports these causes, conservatives suggest that these organizations identify all donors during this inquiry.  Is this an inquiry or an inquisition?  Either way, this reeks of McCarthyism and the Inquisition, using terroristic and threatening methods against people who are simply seeking equal status in the United States.  Should anyone question my use of the word, “terrorism,” Dictionary.com defines this words as, “the use of violence and threats to intimidate or coerce,especially for political purposes.” Our access to freedom is being threatened by congressional attack and verbal abuse in the media.

One must wonder, why is the right wing is becoming increasingly vehement about their patterns of attack upon pro-equality groups?  I can only think that like a drowning person who is so afraid of dying he ultimately drowns the person assisting him, the extreme conservatives recognize that the country is changing all around them.  They are so desperate to save what they know and trust, they are lashing out with every fiber of their being against a segment of their constituents to maintain their current status.  If progressive groups succeed in moving the country into the 21st Century politically and socially, the conservatives will play a diminishing role in the government.  They will be seen as archaic entities that are no longer necessary on the political landscape.  Even in my own life, I recently heard that someone I care about very much, and who is very right wing in beliefs, say to a mutual friend of ours, after reading a particularly pointed blog I wrote, “I thought James was a nice person.”  I believe I am a nice person, but a nice person who has a strong belief in equality for all Americans.

Perhaps we are not hearing hatred shouted from the mouths of angry divisive people; perhaps, rather, we are hearing the death throes of a dying breed, the extreme conservative.  Ultimately, they may not be so interested in what is happening in the pro-equality movement as they are in how it is possible they are watching their demise as a power in the United States.  In the same way as the Roman Catholic Church did as they heard an uprising of people who did not agree with them, they are simply screaming the question, “Why?!”